The Mall Rat Sled is a single shot loading system for the Ruger 10/22, Ruger American Rimfire, or any other firearm that accepts the Ruger BX-1 Magazine.  This allows for a users to load a round through the ejection port and send the bolt home for a single shot action.

I originally designed this product to assist with training my children to shoot, and avoid the pain of reloading magazines when shooting at the range.  When testing many different types of ammunition for optimum performance in your rifle, it is often handy to just hand feed one round at a time.  Also, with children, you can focus on the basics of shooting mechanics without the interruption of loading a magazine.

Beyond my original purpose, I soon identified other benefits of the Mall Rat Sled.  Those with arthritis, neuropathy in their hands, or any other finger dexterity limiting factor would greatly benefit from this product.  Because of the design, it would also be possible to also feed 22 Short or 22 Long shells into a rifle chambered for 22lr.   Lastly, the 22lr precision shooting community would benefit from the reduced stress to both the projectile and case from it not needing to be loaded into a mechanical feeding device. One of my beta testers even commented that a “first round flyer” issue he experiences when feeding his precision 10/22 from a BX-1 magazine is gone when feeding off the Louse Lips Tray or Mall Rat Sled.

Genesis of the name…

This project started with the Mall Rat Sled.  This was the first product I’d ever 3d designed with the purpose of taking to market, and I wanted to share my excitement with a Facebook group that supported me through the design process. 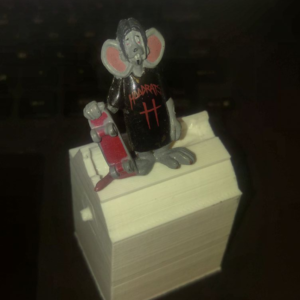 I posted a picture of my first semi-functional alpha design, thanking them for all their help, and encouraging the group to chase their dreams.  Well, because the picture of my design had a 22lr cartridge sitting on the sled, I was accused of sharing with the community how to 3d print “guns” and was told that my post would be removed.  At first I was, let’s say, vocally angry with the administrators, but I soon regained my composure and decided it would be best to just play their game.  I immediately removed my picture and uploaded a new picture of my design with a little rat figurine holding a skateboard standing on top. I’ve had this little rat sitting on my desk for almost 2 decades, I’m not entirely sure why but I’m glad now. I edited my post to the Facebook group announcing how excited I was to introduce them to the new decorative stand I’d made for my Mall Rat figurine.  Many others in the group agreed with the ridiculous admin rules and we spent the next week filling the comments with all sorts of hilarity… well, the name stuck.

The Mall Rat Sled is a single shot loading sled that replaces the magazine in any firearm that works with the Ruger BX-1 Magazine.